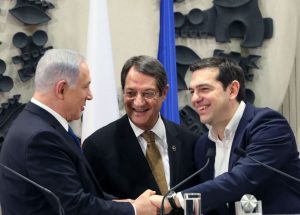 EXECUTIVE SUMMARY: The prospective EastMed pipeline would be the flagship project of the Cypriot-Greek-Israeli collaboration, a developing friendship that enjoys deep foundations. The US has now made its support for that partnership official.

Cyprus, Greece, and Israel are developing a solid partnership in the Eastern Mediterranean because they share similar interests and values and are reliable allies. They are becoming – even more than partners – friends. The sixth tripartite summit, which took place in Jerusalem only three months after the one in Beersheba, put the harmonious nature of the collaboration on display.

From the beginning, the US has favored the forging of a democratic bloc in the Eastern Mediterranean among the three countries. In recent months, that support has become official. Ambassador David Friedman attended the Beersheba meeting last December, and Secretary of State Mike Pompeo attended the summit in Jerusalem. The American role in the trilateral foreign policy scheme has been clearly institutionalized.

The Americans’ interest is explained by the ongoing natural gas discoveries in the Levantine Basin. Last month, for example, ExxonMobil found another gas-bearing reservoir, Glaucus, off the shores of Cyprus. These discoveries can provide the US with not only business opportunities but also energy security. Washington demands that its partners maintain a diversification policy. The more Western countries import from what America sees as safe sources, such as the basin, the more they will reduce their dependency on Russia.

Discoveries in the Eastern Mediterranean are hampered, however, by Turkey’s aggressive policy. It is not unusual for Ankara either to organize military exercises in the Exclusive Economic Zone of Cyprus or to disrupt drilling operations of foreign companies, such as Italy’s ENI. That is why Pompeo’s presence in Jerusalem held special meaning. The initial agreement on the potential construction of the EastMed pipeline frustrates Ankara because Turkey will be excluded from the proposed corridor.

There is consensus in Washington that it is no longer possible to take Turkey’s Western foreign policy orientation for granted. The decision by President Erdoğan to buy S-400 missiles from Russia supports this reassessment. For the time being, Erdoğan is insisting that Turkey will proceed with the purchase and defy American pressure. US support for the EastMed pipeline can function as a warning to Ankara to normalize its behavior.

The project will be very expensive and difficult. Indeed, Italy – contrary to its previous commitments – now appears hesitant to join it. Still, as long as the US advocates for the project’s realization, obstacles will be overcome.

Irrespective of Erdoğan’s choices, Cyprus, Greece, and Israel will continue to deepen their cooperation. This juncture is critical. NATO is placing particular emphasis on dealing with challenges in the South, and the Mediterranean Dialogue of the Alliance is being revitalized in that context. Israel’s contribution can be beneficial for all the countries involved. These include Algeria, Egypt, Jordan, Mauritania, Morocco, and Tunisia.

Greece and Cyprus will have the opportunity to remind their partners in the EU why the security of Israel should be a fundamental priority. It is certainly bizarre that Brussels envisages playing an active role in the Middle East when it regularly ignores the sensitivities of the only democratic state in the region. Ironically, the terrorist attacks taking place in Europe in recent years underline the need to study the Israeli model in coping with the problem.

The three countries – Greece and Israel in particular – can benefit from the good momentum and discuss the implementation of the Belt and Road Initiative in the Eastern Mediterranean and the progress of Chinese investments. Both Greece and Israel are of high interest to Chinese companies. The Shanghai International Port Group (SIPG), which signed an agreement with Israeli authorities to operate the Haifa Port from 2020 onward, is teaming up with China Ocean Shipping Company to promote container shipping traffic. In a period when China is largely seen as an adversary in the West, COSCO’s successful investment in the Piraeus Port challenges this view.

This is an edited version of an article that appeared in the Jerusalem Post on March 25, 2019.